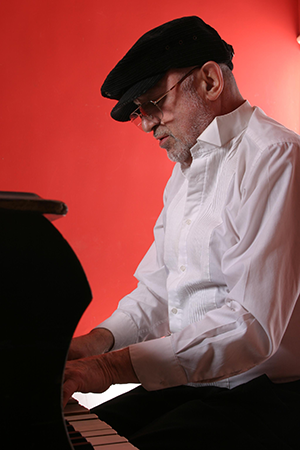 Milcho Leviev was a composer, who has won a lot of awards, arranger, performer (pianist, keyboardist, conductor) and a lecturer in classical and jazz music. Doctor Honoris Causa, New Bulgarian University, 1998.
Holder of the Order of Stara Planina (1997), the highest state honors; awarded by the President of Republic of Bulgaria.
Holder of La Médaille de l’Académie internationale des arts, Paris, France, and Doctor Honoris Causa of the Academy of Music, Dance and Fine Arts, Plovdiv, Bulgaria, 1995.
Lecturer at the Jazz Studies Faculty at the University of Southern California, Los Angeles from 1988 to 1998.
Lecturer at the GROVE School of Music, Los Angeles, from 1974 to 1992.
Musical director of the “Comeback In” jazz club in Venice, CA from 1981 to 1990.
“Dramalogue” USA winner for Best Musical Director in 1987.
Author of the arrangement of “Blue Rondo a la Turk” (Dave Brubeck) recorded by Al Jarreau for his Grammy 1982 winning album “Breakin’ Away”.
Holder of a Grammy nomination for the Best Vocal Arrangement of Charlie Parker’s, “Confirmation”, recorded by Manhattan Transfer for the album “Mecca for Moderns”, 1981.
Co-leader of the jazz-classical quartet “Free Flight”, named Best Combo of the Year in 1982 by the LosAngeles Times.

Author of compositions, arrangements and performances for the American Jazz Philharmonic, the Beverly Hills Symphony, the Sofia Philharmonic Orchestra, the Bulgarian Radio Symphony Orchestra and others. Arranger at Hessicher Rundfunk in the period from 1970 to 1971.
Musical director for the Big Band of the Bulgarian National Radio and Television between 1962 and 1966.
Composer for a lot of Bulgarian feature films, cartoons and documentaries from 1963 to 1968.
Winner of the Critics Prize of the Montreux Jazz Festival in 1967.
Leader and pianist for the Jazz Quartet Focus ‘65 from 1965 to 1970.
Musical director and composer-in-residence at the State Drama Theatre in Plovdiv, as well as professor of chamber music at the State Music School in Plovdiv (1960-1962). In 1959, he won second prize at the International Youth Festival Composition Competition in Vienna, Austria.

2015
Leading a 10 days September masterclass NBU;
Working on the film SILENT MOVIE (about
Milcho Leviev), ARS PRODUCTION;
Promotion concerts of the albums QUIET MARCH and NINA
in Sofia, Plovdiv, and Thessaloniki;
The  TZAR KONSTANTIN SPECIAL AWARD for contribution
to jazz at the NISH INTERNATIONAL JAZZ FESTIVAL

2014
The entire year working on the album A JOURNEY IN TWO WORLDS with BNR Big Band, and the COSMIC VOICES;
10 days September masterclass NBU

2013
April 19, Berlin, Germany, concert dedicated to the salvation
of the Bulgarian Jews during World War II;
Music for THE MERRY WIVES OF WINDSOR by Shakespeare,
staged at the IVAN VAZOV National Theater by the English
director Russel Bolan;
Music Adviser, and interviews for the documentary film RAINY DAY,
shown in Sofia, Plovdiv, Brussels, Moscow, Warsaw, and Krakow.

Tour with Vicky Almazidou, organized by Radoi Ralin Foundation: Blagoevgrad, Sofia, Stara Zagora.
Charity concert in the town of Elena, with Vicky Almazidou. The revenues of the concert are to be donated for the construction of St. Petka Chapel in Elena.
A ten-day Master Class in jazz improvisation at NBU.
Musical Director and leading performer of the closing concert at the 2nd International Festival “Plovdiv Jazz Evenings” in September.
“The Students of the Master” cycle – official presentation of the books “Life in 33/16” by Milcho Leviev and “Given by God” by Vassil Kazandzhiev at the “Pancho Vladigerov” home-museum.
Katoomi Quartet Reunion at the Jazz at ‘A’ Frame in Los Angeles.
Karen Briggs, Albert “Tootie” Heath, Nedra Wheeler and Milcho Leviev together again after 16 years.
Preparatory five-day course for the 2006 NBU Master Class.
Concerts and seminar at the Duke University, North Carolina.
Conducting a concert in tribute to Duke Ellington and Cole Porter with the Classic FM Radio Chamber Orchestra (soloist Vicky Almazidu) at the 4th International Sofia Jazz Peak Festival.
Concerts in Athens, Thessalonikki, Sofia, and Rousse.
Participation at the 4th International Sofia Jazz Peak Festival and a concert at the American Embassy in Sofia with Peter Erskine, Youtis Kiortsoglou and Vicky Almazidu Quartet.

2004
Playing the piano for The Ellington Reunion, presented by The American Jazz Institute at the Claremont College on 2.9. 2004.
Concerts and jazz club dates in Bulgaria, and Greece

2002
Concerts at the Big Conservatory Halls in Moscow, and St. Petersburg.
Honorary professor of New Bulgarian University, a 10-day Master Class at NBU.

2000
Concerts and club performances  in USA with trio Lesentu, Herbie Mann, Jack Sheldon, and others.

1990-1993
European solo tours (France, Germany, Switzerland, Bulgaria), as well as seminars, conducted at the Basel Jazz School, and at Varna International Music Festival. Composed and performed “Orpheus Rhapsody” for piano and orchestra (commissioned by the National Endowment of Arts for the American Jazz Philharmonic)

1985-1986
European tours in 1985 and 1986.
“Sympho-Jazz Sketches” (commissioned by the American Jazz Philharmonic);
premiered at Dorothy Chandler Pavilion (composer and soloist)

1980-1983
Co-leader of “Free Flight” (Playboy Jazz Festival and a lot of other festivals and venues), the Tonight Show, and a winner of the Los Angeles Times Best Combo of the Year Award, 1982. Played/recorded with Charlie Haden, Joe Farrel, Eddie Harris, James Newton, and others.

1974-1975
Milcho Leviev worked with Billy Cobham as, a keyboardist, composer, and arranger in Billy’s
Band 1974 and 1975, tours in USA, and Europe.
Recorded 3 albums with Cobham: TOTAL ECLIPSE, SHABAZZ, and A FUNKY THIDE OF SINGS, as a pianist, composer, and arranger.
As an artistic Director of the International PLOVDIV JAZZ EVENINGS Festival, Milcho Leviev invited Billy, and his band CULTURE MIX.

Compositions, arrangements and articles in Down Beat, Keyboard, The Piano Stylist, Piano Today and other magazines worldwide.